This note addresses the steps in the symmetrization technique in empirical process theory in probability. I will walk through each step and provide explanations. If you have some confusion and questions about this technique, like me, then this might be helpful to you! I encountered the argument perhaps 5 or 6 years ago, and I thought I knew what was going on. Until recently, I realized I missed something (especially the step

below), when I tried to use it in my own research.

is a set. We are given a series of independent random varaibles

, which take value in

. A typical quantity appeared in empirical process theory is

And we aim to upper bound it using the so-called Rademacher complexity (to be defined later).

. Let us display the symmetrization argument: 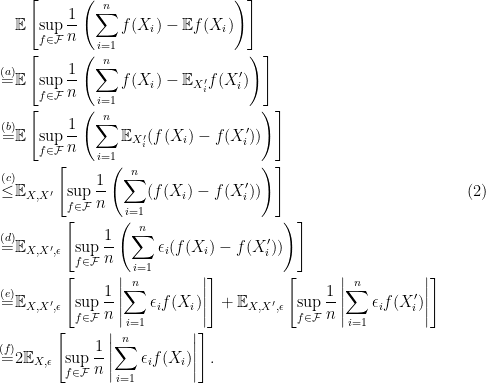 is called the Rademacher complexity of

, we uses the fact that

has the same distribution. In step

, we use the fact that

are independent so that we could take the expectation w.r.t.

, we use the triangle inequality. Next, we explain the steps

. Here in the step

, we use the fact that for each

Taking the expectation over

first and then taking an expectation over

, we conclude the step

looks puzzling (to me) at first. A naive reasoning of

has the same distribution as

. I was not convinced by this argument since we are taking a superium over

Denote “equal in distribution” as

. The things we are (or I am) missing is that there are

. Hence, knowing that for each

is not enough. Let us first assume

is fixed. What we really need is to ensure that for any fixed

, the joint distributions of the following two are the same,

Hence, because of independence of

This establishes the equality (3) for each fixed

uniformly, then we see (3) continues to hold by using the law of total probability: for any measurable set 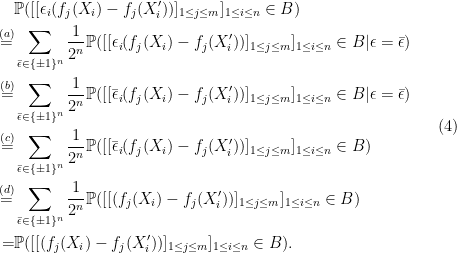 , we use the law of total probability by splitting the event according to the value

, we replace the value of

, we use the fact that

being random. This means for any measurable function

in the symmetrization argument now follows by taking an appropriate

Remark. To deal with the case that

is infinite, we may set

Then our previous argument continues to work.