. The dual of the standard form is

be the optimal value of Program (3) and

be an optimal solution to the same program. We would like to ask the following question:

Such questions are called the conditioning of Program (2). It asks under some perturbation, how does the solution and optimal value changes accordingly. In general, we hope that Program (1) and (2) to be stable in the sense that small perturbation in the data, i.e.,

, only induces small changes in the optimal value and solution. The reason is that in real application, there might be some error in the coding of

. If Program (1) and (2) are not stable with respect to the perturbation, then possibly either more costs need to be paid to the encoding of the data or the LP is not worth solving. At first sight, it is actually not even clear that

To address the first issue, we make our first assumption that

A1: Program (2) has a solution and the optimal value is finite.

Under A1, by strong duality of LP, we have that Program (1) also has a solution and the optimal value is the same as the optimal value of Program (2). This, in particular, implies that (1) is feasible. We now characterize the region where

is finite. Let the feasible region of Program (1) be denoted as

the set of vertices of

and the set of extreme rays be

. Using our assumption A1, we know

Now according to the Resolution Theorem of the primal polyhedron, we have

Using this representation, the fact that the primal of Program (3) is

Thus it is immediate that the region where

is bounded, then we have

to be always finite.

To address the issue whether

is unique, we make the following nondegenerate assumption on vertices.

A2: All the basic feasible solution of (1) are non-degenerate, i.e., all vertices of the feasible region of Program (1) have exactly

Under this condition, and the definition of basic feasible solution, we know if

is a basic feasible solution, then

has all column independent. Here

is the submatrix of

having columns with indices in

is a baisc feasible solution and it is a solution to Program (5), then

is the unique solution to Program (3) where

which is a polyhedron, we may write the above compactly as

Then it is easy to see that the Lipschitz condition of

Similarly, by using the theorem in this post, we see that

are arbitrary norms. We conclude the above discussion in the following theorem.

is the set of extreme points of the feasible region of (1),

. Under assumption A1 and A2, we have for all

is the submatrix of

having columns with indices in

Suppose we have a collection of sets

and a set of

being closed polyhedrons in

. Then we can define function

is convex. We now state a theorem concerning the Lipschitz constant of

Theorem 1 Under the above setting, given arbitrary norms

-Lipschitz continuous with respect to

. we see the inequality (1) is equivalent to

Using the property that

, we have that there exists

s have the property that

Thus we can bound the term 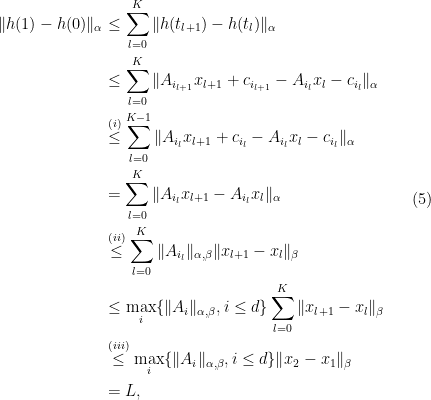 is due to the definition of operator norm and

is using equality (4). This proves inequality (1).