Suppose we have a general optimization problem.

Also, suppose problem (1) has a minimum and the minimum can be achieved by a unique minimizer

Now if I have a point

is very small, then how small is the distance

. This is true if

is continuous. But this does not tell what is the quantitative relationship between the optimal gap, i.e.,

, and the distance to the solution, i.e.,

In this post, I am going to show that for linear programming (LP), the optimal gap and distance to solutions are the same up to a multiplicative constant which only depends on the problem data.

To start, consider an LP in the standard form, i.e.,

where the decision variable is

and problem data are

means each coordinate of

Denote the solution set of problem (1) to be

, and the distance to the solution set

. Note that the norm here is arbitrary, not necessarily the Euclidean norm.

We are now ready to state the theorem.

which depends only on

such that for all feasible

The above theorem shows that the role of optimal gap, i.e.,

, and the distance to the solution set, i.e.

, are the same up to a multiplicative constant. The right inequality of the theorem is usually referred to as linear growth in the optimization literature.

The proof below is constructive and we can in fact take

is the dual norm and

are extreme points and extreme rays. We assume there are

many extreme points and

many extreme rays with first

are in the optimal set

. See the proof for more detail.

The idea of the proof mainly relies on the extreme point and extreme rays representation of the feasible region and the optimal set,i.e.,

Proof: The feasible region can be written as

s are extreme points of the feasible region and

The optimal set can also be written as

We assume here the first

are in the optimal set and the rest of

s are not for notation simplicity.

s not in the optimal set should have inner product with

, it can be written as

The objective value of

We use the fact that

Subtract the above by

The second equality is due to

and the inequality is because of the definition of

is the infimum of

and apply triangular inequality to the above quantity, we have 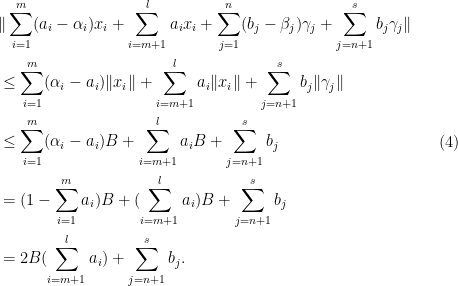 . The second inequality is applying the definition of

. The first equality is due to

and the second equality is due to

Thus the distance between

is bounded above by

by our previous argument, we see that setting

We now prove the inequality

Note that the infimum in

is actually achieved by some

. The reason is that we can first pick a

is actually bounded and closed (

is closed as it is a convex combination of finite points plus a conic combination of extreme vectors), thus Weierstrass theorems tells us that the infimum is actually achieved by some

From the proof, we see that two possible choice of

. These are not optimal and can be sharpened. I probably will give a sharper constant in a future post.